Prescription of additional remuneration: the trend in case law is confirmed (again)

An order of the Paris Court of justice of 25 June 2021[1] confirms the rules governing the application over time of the successive provisions on statute of limitations for claims for additional remuneration of employees' inventions (1).

In this decision, and in an earlier decision of December 2020[2], the Court also recalls the rules for assessing the starting point of the limitation period in concreto (2).

It is known that before 19 June 2008, the statute of limitations for employee inventors’ claims for additionnal remuneration was that of Article 2277 of the Civil Code as interpreted by the case law : the action was time-barred after 5 years from the day when the employee had the elements necessary to calculate his additionnal remuneration[3]. In practice, this amounted to a quasi-imprescriptibility of the action as explained in a previous article[4] and in our Patent Workshop devoted to this issue[5].

This decision of 25 June 2021 recalls that as from 19 June 2008, date of entry into force of Law n°2008-561, the statute of limitations of article 2224 of the civil code[6] (5 years as from the day the employee knew or should have known the facts allowing him to exercise his action) has replaced the former statute of limitations for the claim for additional remuneration.

As a result, in cases where the employee knew or should have known, before 19 June 2008, the facts allowing him to exercise his action, the action is time-barred since 18 June 2013 (1st case in the diagram). This is what has been ruled in previous cases[7] and what has been ruled again in the decision of 25 June.

In this case, although his right to additional remuneration had arisen under the old law (the invention having been made prior to the entry into force of the 2008 law), the statute of limitations of Article 2277 of the Civil Code as interpreted by the case law had never run since the employee had never had the "elements allowing him to calculate the amount due to him". On the other hand, the pre-trial judge considers, after an in concreto assessment which will be detailed below, that the employee did have knowledge of the "facts allowing him to exercise the action". As this knowledge by the employee took place in 2003, and as the new law could not be applied retroactively but was immediately applicable, the new five-year limitation period started to run as soon as the new law came into force, i.e. on 19 June 2008. The statute of limitations was thus acquired 5 years after the entry into force of the law, i.e. on 18 June 2013, and the action brought by the employee in 2019 was thus time-barred.

It should be recalled that, since 17 June 2013, Article L. 3245-1 of the French Labour Code, 1st sentence, applies, which provides for a shorter limitation period (3 years) but with the starting point still being the day on which the employee knew or should have known the facts enabling him to exercise his right. Therefore :

- in cases where the employee knew or should have known the facts allowing him to exercise his action while Article 2224 of the Civil Code applied, i.e. between 19 June 2008 and 17 June 2013, this action shall be time-barred 5 years after the day of knowledge or presumption of knowledge, without the limitation period exceeding 17 June 2016[8] (2nd case of the diagram);

- in cases where the employee knew or should have known the facts enabling him to bring an action after 17 June 2013, this action is time-barred 3 years after the day of knowledge or presumption of knowledge (3rd case in the diagram).

The diagram below summarises the 3 cases presented above. 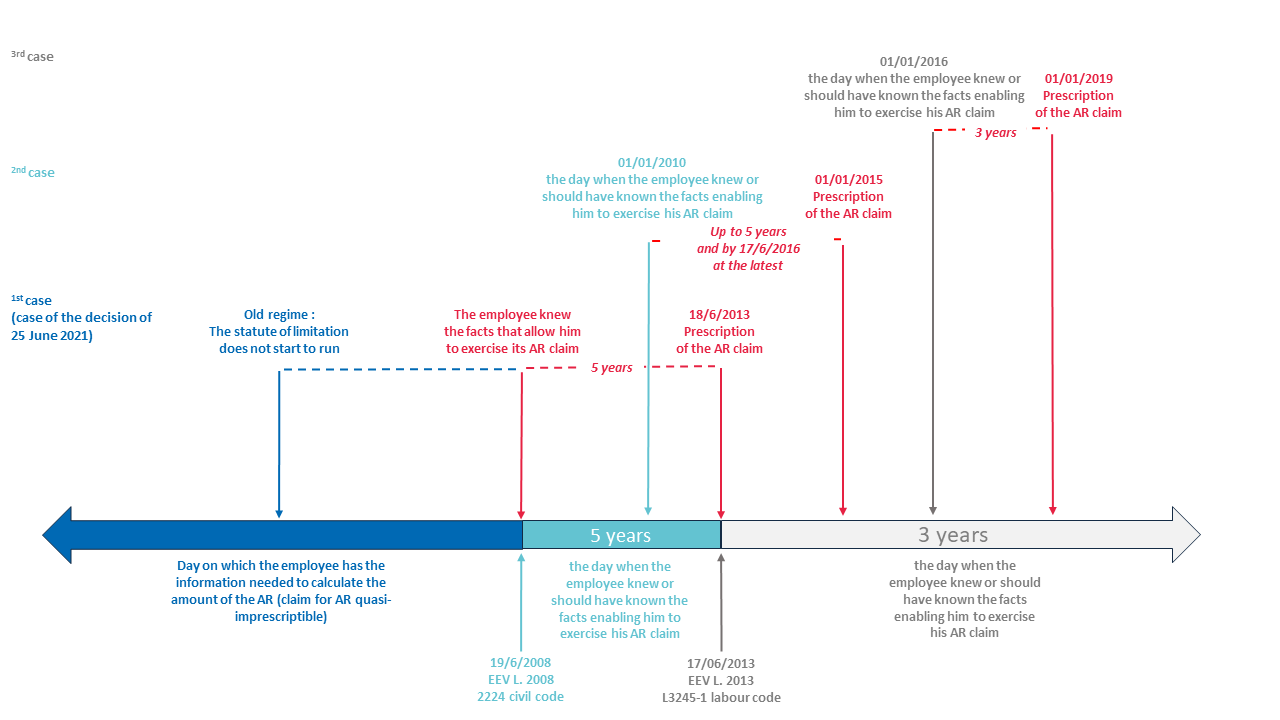 All the chambers of the 3rd section of the Paris Court of Justice now seem to be aligned on the principle of an in concreto application of the starting point of the statute of limitations for claims for additional remuneration.

The order of 25 June confirms the trend in case law already commented[10], which states that if the employer fails to justify that he has put his employee in a position to exercise his right of action (either by providing for an individual provision in his employment contract, or by implementing a sufficiently precise internal procedure on the conditions of application of the additionnal remuneration for employee inventors), the starting point of the statute of limitations must be assessed in a concrete manner, but without requiring the employee to know the elements that will enable him to determine the amount of his claim.

The pre-trial judge begins with a paragraph of principle according to which "Article 2224 of the Civil Code (...) implies to assess concretely and independently of the birth of the right - i.e. the realization of the invention - the date at which the employee had the elements enabling him to invoke it - in other words making the action possible - which does not require the knowledge of the remuneration due but the means to claim it".

Then comes the assessment of the facts of the case.

The pre-trial judge considers that before 2003, the employee did not have knowledge of the facts allowing him to exercise his action:

- Before 2001, "there was no individual provision or internal procedure within the company which was accessible to the employee and enabled him to be informed in a sufficiently precise manner about the conditions of implementation of the additional remuneration, if necessary by reference to the applicable collective agreement";

- As of 2001, there was indeed a clause applicable to the employee but it made the award of additional remuneration conditional on the granting of the patent and on the "exceptional interest" of the invention. However, on the one hand, the employee had no information on the exploitation of his inventions, and on the other hand, this clause merely repeated the terms of the collective agreement for the metallurgy industry, which were deemed to be unwritten[11].

However, the pre-trial judge considers that this knowledge is established as of 2003, because of the following three factual elements

- The collection of bonuses presented as "patent bonuses" remunerating a total of 47 inventions made throughout the employee's career;

- The introduction of internal provisions for employee inventions by the group to which the employing company belonged;

- The employee's position: as 'innovation tender manager' he was '[involved] particularly in the field of innovation' and could therefore identify the inventions that were most significantly beneficial to the company.

Finally, the pre-trial judge recalls that this assessment of the starting point does not imply that the employee had "usable data" on the economic interest of the inventions for the company. In other words, it is not necessary for the employee to have knowledge of the elements allowing him to determine the amount of the remuneration due. Once again, the old regime is abandoned.

In so doing, the pre-trial considers that the employee was aware of his right to additional remuneration at least in 2003 and that his action is therefore time-barred in application of the rules on the sequencing of the different limitation regimes mentioned above.

This decision also confirms the importance for companies to set up a additionnal remuneration system and to inform employees of it: this is one of the factors that the judge takes into account to consider that the employee, in concreto, had knowledge of the facts.

In another recent decision, from December 2020, the Third Chamber of the Court[12] held that in the absence of any additional remuneration system in the company :

"[The employee] was not aware of the calculation method applicable within the company in this respect and had no means of determining the remuneration he was likely to claim, which only the employer had, so that the claim was not determined, nor was its amount determinable, and the limitation period could not run.

However, in this case the court found, after an in concreto investigation, that the employee had no knowledge of facts that would allow him to exercise his claim for additional remuneration.

These two recent decisions have the merit of being consistent with previous case law trends.

We recall, nonetheless, that no appeal or cassation decision has confirmed this stated tendency of the court.

For our part, we note that the Court of Cassation has recalled that "assuming that the invention of the mission is characterised, the employee's right to additional remuneration can only be invoked against the employer and comes into being on the date the patentable invention is made"[13], whether or not the invention is subsequently patented. This position also appeared to be that of the Court in a 2015 decision, in which the judges considered that "in order to determine the starting point of the five-year limitation period, it is necessary to take into account the employee's knowledge of the fact that the qualification as a mission invention had been acquired"[14].

In other words, making the start of the limitation period dependent on the existence of a additionnal remuneration system in the company, or on the employee's knowledge of it, amounts in our view to disregarding the principle that no one is supposed to be unaware of the law.

[1]  The decision is available in French here, Grégoire Desrousseaux, author of this article, represented the defendant in this case.

[2] The decision is available in French here.

[6]  At that time, Article L. 3245-1 of the Labour Code provided that "The action for payment or recovery of wages is prescribed by five years in accordance with Article 2224 of the Civil Code".

[8] See the transitional provisions of the 2013 law in the new Article L.1471-1 of the Labour Code: The provisions of the Labour Code set out in III and IV of this Article shall apply to statutes of limitation in force as from the date of promulgation of this law, without the total duration of the statute of limitations exceeding the duration provided for by the previous law.

[12] TJ Paris, 3.3. 18 Dec. 2020, RG 18/08302. The court also explicitly recalls that the statute of limitations runs notably when the employee was aware of the elements allowing him/her not to determine the amount of his/her claim, but to evaluate it, which is assessed in the light of an in concreto analysis of the context in which the employee finds himself/herself. The criterion of the former case law is once again abandoned.

Article | Prescription of additional remuneration: the trend in case law is confirmed (again)